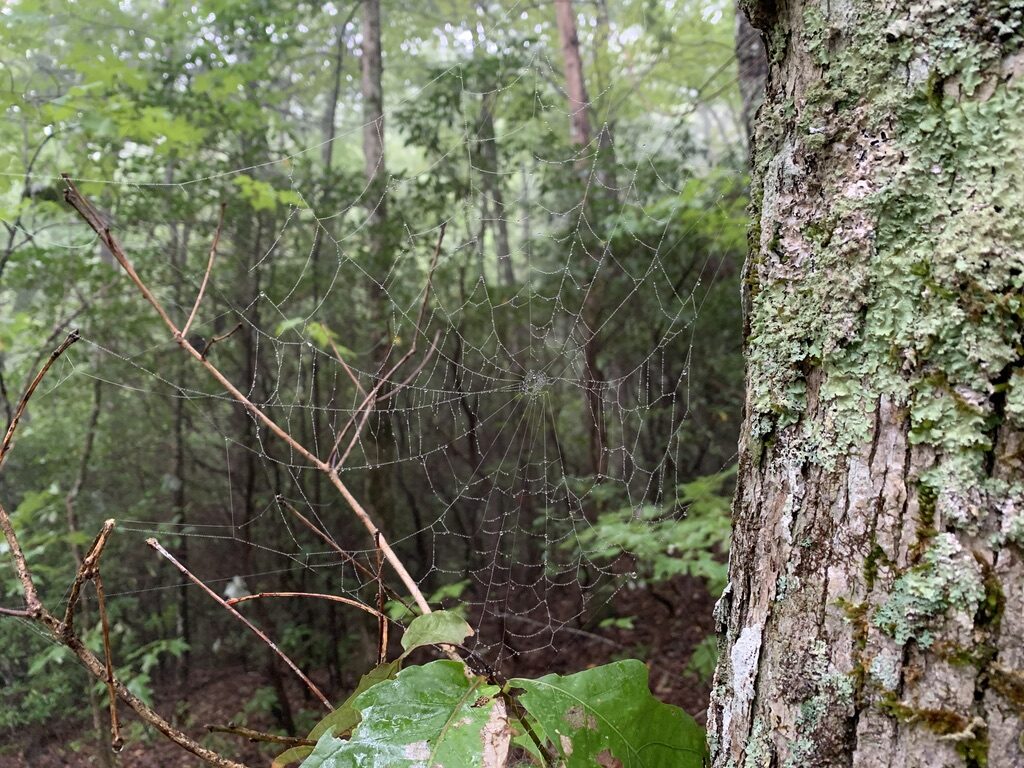 This post is about harvesting the trees I need for my cabin.

From my cut list, I estimate that I will need to harvest more than twenty trees to supply walls, joists, trusses, floorboards, and roof sheathing. I have cut down a tree or two from time to time. But, harvesting twenty, in the woods where they are apt to get hung up, was a daunting prospect.

With the assistance of forester Jack Catlin (Toccoa, Georgia), I retained the services of two fine tree fellers, namely Eric Gibson of Young Harris, Georgia, and his father Edward.

We met up on an early morning in September. In fact, I had spent the night before at the campsite with my friend and colleague Rico Holdo. Rico and I had come a day earlier to get the camp ready, including re-hanging the bear bag that had become snagged during my last trip, and moving the sawmill, which was in the path of a large oak tree that Eric would be taking down.

To meet the crew at 7:00am meant leaving camp in the dark at 6:15. I had thought that perhaps Rico would sleep in and then make a hot breakfast. But, since he needed to be back in Athens by midday, he elected to walk down with me. We enjoyed a very lovely sunrise while on the ridge. Regrettably, I didn’t take a photo.

Jack and the group were a few minutes late, but we were still underway by around 7:40. The hike up was uneventful. All were impressed by the progress at the site. Jack had been there before, of course, but I have made progress since then. I’m not sure what Ed and Eric were expecting, but Eric volunteered that this was not it.

Our first task was taking down a large oak that would threaten the cabin. I hated to take down such a beautiful and interesting tree (it’s trunk curved in a kid of S-shape, beautiful to behold but not prime lumber), but the last one I took down that was that size was rotten to the core and this one was just too close to leave. Ed and Eric have a system that involves using a giant slingshot to thread a heavy rope through the upper branches of a tree. They were confident that they could drop the big tree downhill where it would fall on the brush pile and pulpwood downslope from the cabin.

As they say about the best-laid plans, that’s not what happened. The tree fell straight through the cabin site, basically obliterating the rhododendron edge of the grove that Scott refers to as “the copse”. I wasn’t upset. It was close but we nonetheless managed to miss all four of the cabin foundation posts I had placed earlier in the summer. And, the tree was down. To me, that counted as a success. We were also vindicated as this tree, also, was deeply rotten at the base.

More help, friend Drew Kramer, arrived around noon. He had missed the turn that would take him up to the ridge. But, hearing our chainsaws, he set out cross country, arriving in a record sixty minutes.

We worked throughout the afternoon. A few trees did get hung up, but with the assistance of the portable log winch, we managed to get almost all of them to the ground in the end. Even with a few hangers, there’s no doubt that Eric and Ed did a far better job than I could have done, and by about 5:30 we had managed to take down somewhere around twenty trees.

Felling trees is hard work, but it’s fun. Here’s a montage of some of the finer moments.