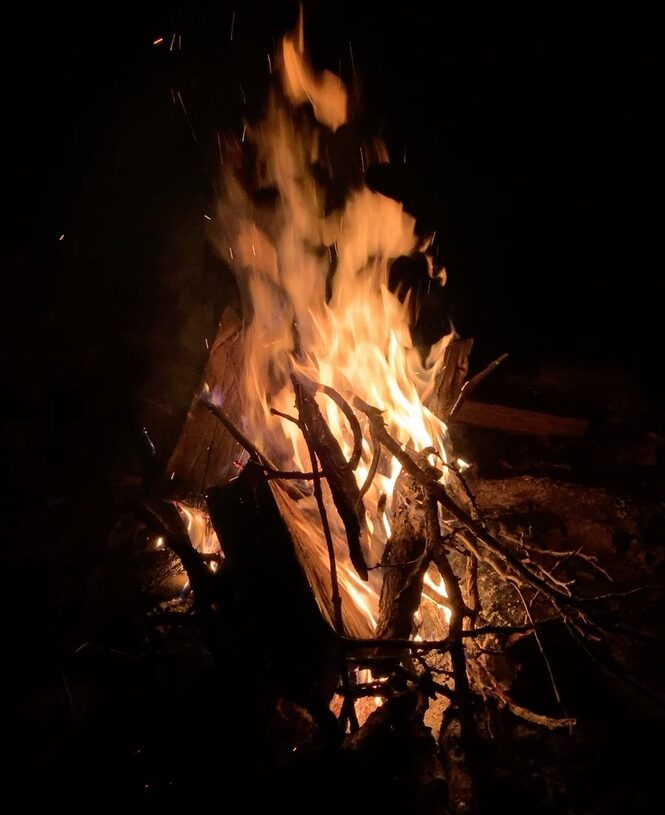 This post is a little late, coming two days after Christmas, but I’ve been busy with other things and not had much time to write. Some readers will know that I was up in Hiawassee for four days at Thanksgiving. Not everything went to plan, and I will try to write a couple of posts about that. Meanwhile, I thought I’d share what I did for Thanksgiving dinner.

I do pretty much all of my cooking over the open fire. My friend Drew, introduced in this post, calls it “pioneer camping”. I always just thought of it as cooking. When it’s feasible, I prefer cooking over the fire for a couple of reasons. First, there is no shortage of fuel. Carrying up canisters for all cooking needs gets old (and expensive) fast.

I worked well into the evening on Thanksgiving, so it was dark by the time I began preparing dinner. For my Thanksgiving feast, I had brought half a duck, previously cooked and frozen.

It was frozen solid when I left home three days prior. Given the cold temperatures, both at night time and throughout the day, I was more worried about it having thawed than about spoilage. But, it was fine. In fact, it was perfect: quite cold, as if it had been refrigerated, but thawed all the way through.

I grilled the duck over an open fire and also made some mashed potatoes. I find that Idahoan brand mashed potatoes are nearly as good as potatoes from scratch and far more convenient in the backcountry.

Needing a surface I could cut against with a sharp knife (not a paper plate!), I found a wooden “plate” among the castoffs from the day’s work. Here’s a photo of my Thanksgiving dinner of grilled duck with orange sauce and mashed potatoes, enjoyed with half a bottle of French red. After dinner, the plate went in the fire.