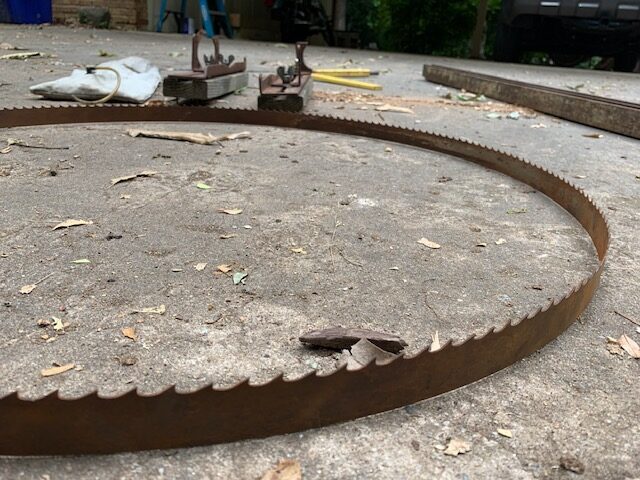 The decision to build the cabin with materials I could harvest myself significantly changed my calculus about a number of aspects of the cabin design. Particularly, size would be constrained, materials would have to be available, and timber would need to be sufficiently lightweight both to move from to point of felling to the build site and to place in position while building.

I’ve read about a number of projects that used round logs, including most of the projects listed in my post on inspiration. But I really like the look of squared logs. As one step of my design process, I spent several evenings combing Pinterest to create a board of design ideas. The only criterion for inclusion on the board was that the image touched on some functional or aesthetic note that struck a chord with me. This board can be viewed here. There are a lot of squared log buildings on this board.

It seems to me there are also a few practical benefits to building with squared logs. One is that the logs are lighter than the equivalent round log from which a squared log is cut. The other is that the notches are all identical and can be cut with a jig rather than by individually scribing each log, reducing the level of custom measuring and cutting and cutting down on construction time, errors, and frustration.

I briefly entertained the idea of hewing logs with an adze and broad ax. A lengthy conversation with Kevin Rowe was educational and inspirational, as was his photo gallery. But, I decided I don’t have the patience to build a hand-hewn cabin. Besides, even if I could hew logs for the walls, I would still need sawn timbers for joists, floor, sheathing, trim, etc. I also briefly entertained the idea of using an Alaskan mill for the entire project. I know there are some people that generate a remarkable amount of lumber using this method, especially in remote locations, but I concluded that the physical effort involved and the frequent need to sharpen chains would be simultaneously too exhausting and tedious to be practical.

This left me exploring the world of small-operation sawmills. A friend of a friend gave me a sawing lesson on his hydraulic Woodmizer. I don’t remember the model number, but it was similar to the LT35 or LT40. The lesson was great, but obviously, I’m not going to be able to use a machine like that for my cabin.

I looked online at a range of lightweight sawmills, including the Lucas Model 6-16 and Peterson All Terrain Sawmill (both circular mills). These appear to be great saws but cost a bit more than I wanted to spend on this aspect of the project, never mind the likely impossibility of securing one in the middle of COVID.

At this stage, what I thought I wanted was a small Hud-son mill like the ones in their Freedom line of mills. At a minimum, these weigh around three hundred pounds. Recall that my site is a two-mile hike from the nearest road and I don’t have any method for transporting something that heavy. I gave the company a call to see if I might be able to disassemble the mill sufficiently to pack in the separate components and then rebuild the mill at my cabin site. Nichole in the customer service department at Hud-son was fantastic. She was happy to connect me to the fellows on the floor and was generally very supportive. If memory serves, I think we determined that it would be feasible, with the heaviest component weighing around 65 pounds. But the problem would be sourcing a mill since the factory was already back-ordered until next year. Nichole suggested contacting the closest of their dealers, Jim Lugo of Royston, Georgia, to see if he had any units not yet spoken for.

Like Nichole, Jim was intrigued and supportive of the project. I really don’t like to start conversations with “I know this sounds crazy, but please hear me out…”, but Nichole and Jim were both very gracious. However, Jim, like Nichole, wouldn’t be able to provide me with a Hud-son saw until the factory had worked through their backlog. On the other hand, Jim had another idea.

As it turns out, Jim had a saw on hand that actually might fit my purposes even better than the Hud-son. The saw was manufactured by a defunct company called Lumbersmith and Jim had one that had been a dealer demo even though he had never sold them. Lumbersmiths were made to be ultra-lightweight. The saw comprises a 4.5 hp Honda engine, a gearbox, and a mill head made of cast aluminum. Other than the aluminum housing (and possibly the bandsaw wheels) it appears that none of the parts are really custom made (hence, they are repairable). The key thing is that this saw was designed to be taken places where no other saws can be brought in. The entire unit only weighs 105 pounds. If necessary, I should be able to disconnect the engine from the rest of the mill and pack it in with just two trips. (Note: at the time of this writing this is still hypothetical as the saw is currently sitting in my backyard.)

The saw had hardly been used but had been sitting for several years. The carburetor was gummed up, so we replaced that. We didn’t have a manual (though I’ve since found one here), so it also took some time to figure out alignment, tensioning, etc. all of which is done manually with the aid of turnscrews.

Another Jim, Jim Garver, came over the evening I picked up the mill from Jim Lugo. In less than two hours, Jim Garver and I assembled, aligned, and tensioned the mill. Tensioning was done by hanging a gallon of water from the blade and tightening until the blade just didn’t yield under the force. (Yes, that is the recommended method.) The engine fired up on the first pull. Of course, because the blade is directly connected to the gearbox, whenever the engine is running the blade is turning, which does perhaps make the saw a bit more hazardous than most. That night, Jim and I cut our first log.