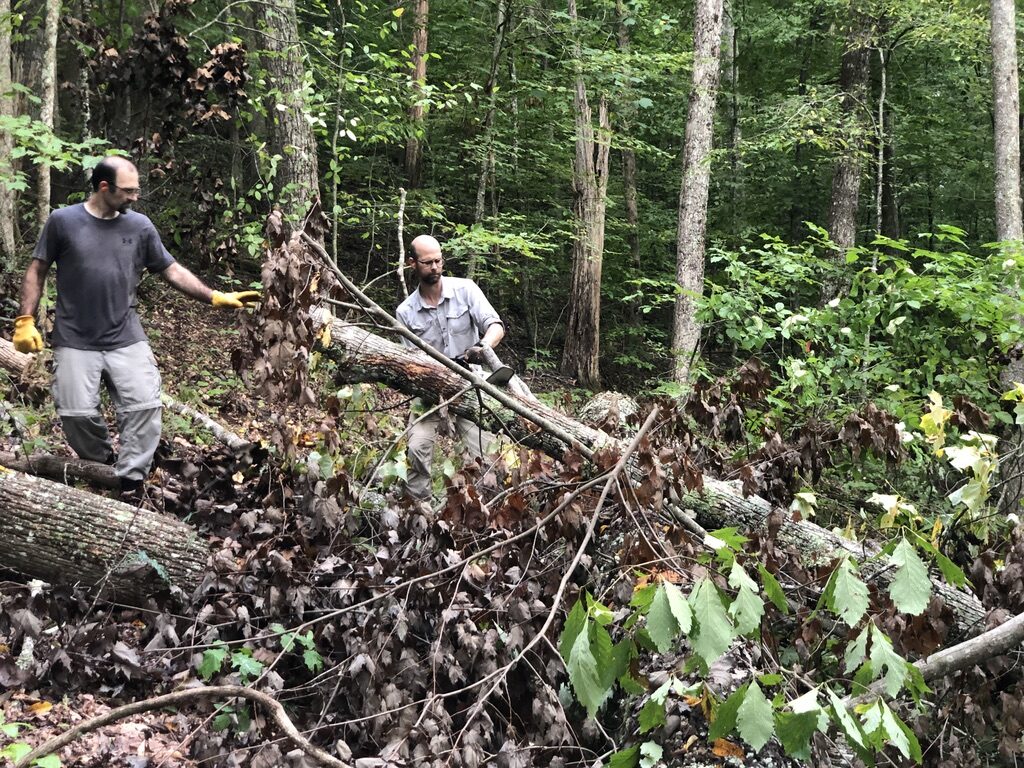 Now that the trees are down, I am faced with the formidable task of moving them to the building site. I tried to take trees between fourteen and eighteen inches in diameter (that is, diameter-at-breast-height, or “dbh”). I considered this to be the happy medium between large enough for building purposes and small enough to move. In retrospect, most of the trees we harvested are in fact a bit larger than this. This will make them considerably harder to move.

I anticipate that it may take many months of weekends to move and mill the trees we have taken down. Additionally, I plan to move, mill, and build in small increments, rather than moving all the trees at once, then milling all my boards, and then finally building only after all the materials are ready. This is for two reasons. First, I suspect that I will learn some important lessons along the way. Perhaps after I start building I will discover that I should change my design, necessitating a different set of materials. Second, my cabin ridge is too small. I simply don’t have the space to store such a pile of logs or to dry all my materials.

I was helped during my first full weekend of logging by my friends Brian Carlisle and Jonathan Davis. Here’s a picture of Brian and Jonathan when they came up to the site in September 2021.

I have two pieces of equipment that I hope will aid the process. The first is a 2016 Polaris Ranger 6×6 side-by-side ATV that I have managed to get to the site. The second is a 1.3hp gas-powered portable logging winch manufactured by the Portable Winch Company of Sherbrooke, Quebec in Canada. The winch is powered by a Honda 4-stroke GX35 360° inclinable motor and is advertised to pull 1,600 pounds in a straight pull. Obviously, I can multiply this as necessary with a pulley system.

Even with this equipment, I expect moving logs will be an arduous process. Checking (cracking of the logs as they dry) is a concern, especially since I will not be able to mill immediately. According to the Internet, the best solution to this is to slow the drying process as much as possible by painting the exposed ends with some impervious material. I have used Anchor Seal 2, which I bought on Amazon. This product is a blend of plant-based polymers and wax and is advertised to reduce checking by up to 90%. It’s thick stuff. I slathered it on with a four-inch paintbrush, trying to get to all of the cut ends within twelve hours of when we cut the trees. Twenty trees, some cut into logs and others not, have so far used about 75% of the gallon.

Another issue that I quickly discovered is that it takes considerable space to move a twenty-foot log. Most of the trees are in a basin I am calling “the woodlot”, which is uphill from the cabin site. I spent roughly one whole afternoon clearing a path from the woodlot to the cabin site. It’s reasonably steep, so besides clearing shrubs and small trees I also cut some branches and laid them perpendicularly across the path in an attempt to control erosion and improve traction for the ATV. My plan is as follows. There is a reasonably flat area at the center of the woodlot, which I have designated as a staging area as there is certainly not enough space at the campsite for all the wood from twenty trees. Above the staging area is a gentle slope along which I have cleared a road that I hope will allow me to drag out perhaps twelve trees. (The others are scattered around and will require additional planning.) It will no doubt take some effort as most of these trees will first have to be dragged up to the road. But, with sufficient clearing of obstacles (i.e. treetops) and bucking (cutting tree trunks into suitably sized logs), I’m optimistic that the portable winch will be able to handle it. My idea is to stockpile logs at the staging area, then drag them down to the cabin site where I will mill them as needed.

I have now been up to the site two additional times since I cut my timber. In the process, I’ve learned quite a bit. One lesson learned is that the effort put into preparing a path to skid a log is time well spent. The plastic logging cone that I bought from Columbia Safety and Supply, dubbed the “log condom” by Jonathan, is worth its weight in gold. Actually, it’s quite light. And, it is fantastic for maneuvering logs around obstacles.

The following clip shows us skidding a log using the ATV and the logging cone. You can overhear Jonathan’s commentary in the clip. We managed to get this log the entire way to the cabin site without incident.

As predicted by some commentators, my log arch is not quite as tough as I’d like. However, contrary to my expectations, it is not so much the weight of the logs that is the problem, but the tendency to get hung up on rocks and stumps. When this happens, if I’m not careful, the pull of the ATV is enough to bend it out of shape. So far I’ve managed to bend the tongue, the forward upright, and the arch itself. But, I haven’t done so much damage as to render the tool unusable.

The portable winch has proved to be indispensable, but equally indispensable are the pulleys that magnify its pulling power. Initially, I had two snatch blocks and a pulley on a hook. Of course, these are useful, but to really benefit from the mechanical leverage of the pulleys I really need something that functions more like a block and tackle. To this end, I have ordered some double snatch blocks from the Portable Winch Company. At $95 a pop, they are pricey, but they are rated to 90 kN (about 20,000 pounds) and I haven’t found anything of comparable strength for significantly less.

Related, I made a mistake by ordering a cheap rope from Amazon. The rope was sized for my winch and pulley system and listed as “arborist rope”. But, when put under strain it just stretched. I made a complaint and the vendor refunded by payment, but only after asking for documentation. (It’s a good thing I took some pictures when I was using it.). I have since acquired a 328-foot spool of 3/8″ double-braided polyester rope from the Portable Winch Company. So far, this rope has proved to be more than adequate. It cost four times what the cheap Amazon rope cost, but has been well worth it.

Finally, my last discovery is the utility of the choker chain. I had initially brought a few lengths of 3/8″ chain on the conjecture that they might somehow prove generally useful, but with no more specific plan than that. Besides this, I bought a couple of clevis slip hooks. These have proved invaluable. Of course, there are attachment techniques that allow you to create a choker with just a chain and quick link or clevis hook, but making a choker with a slip hook is so easy! I had thought I would probably use straps and steel carabiners (which I have stocked up on) for attaching the winch, ATV, etc. to logs. In fact, I have found the choker chain so straightforward that I now use it almost exclusively. Together with the Woodchuck “Dual Pro”, it is very easy to first lift a log off the ground with the Dual Pro’s timberjack and then slip the choker chain around it.

The following clip shows how we use the woodchuck to lift logs off of the ground.

I’m still quite a ways from moving all my logs to the cabin site. How much of the work is done? Maybe 3%. But I’ve successfully completed each task: separating a log from its branches, moving it up to the staging area, dragging it down to the camp site. I’m sure there’s much still to learn, but none of it seems insurmountable.