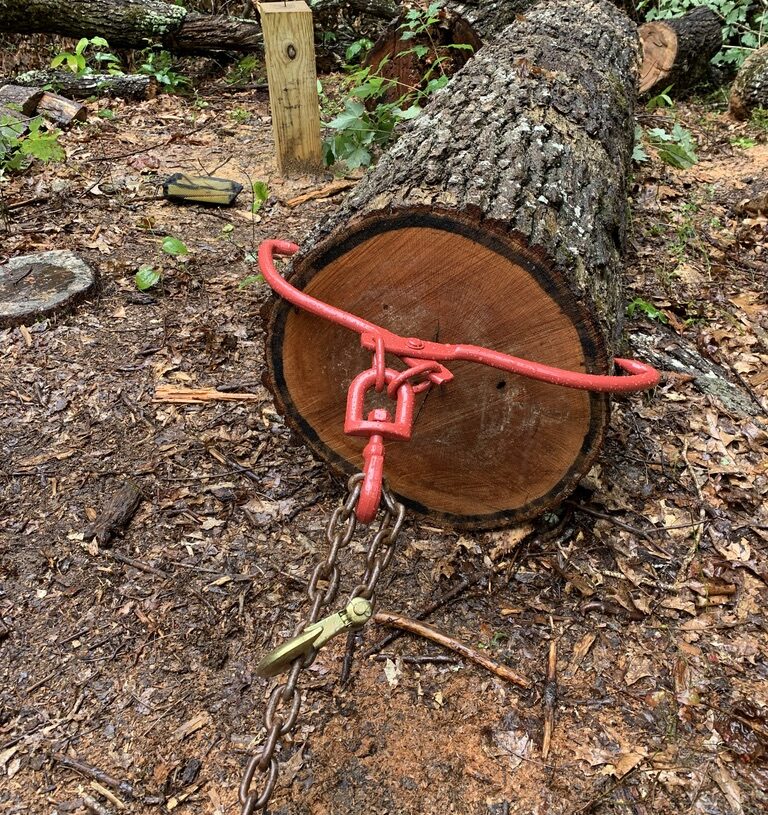 Last weekend I was joined by Reese (who helped with the log arch) and his brother Kit. With clear weather, we decided to dive right into work. The highest priority job was moving and milling a large tree that I had previously taken down from the middle of the cabin clearing.

The butt log was about sixteen feet long and twenty inches in diameter. I estimate that it weighed 2200 pounds. One possible use for the log is floor joists, which required moving the log intact. From its current location on a slope, this would mean moving uphill about eighteen inches and then along rough ground about twenty feet. We quickly realized this was not going to happen.

Next, we cut the log into two eight-foot sections. These were slightly easier to move, but not by much. We spent about an hour using the logging winch in an attempt to drag one of those sections. Our efforts were hampered by two factors. First, the rope that I had bought was clearly not up to the task. The log section was only about 1100 pounds and the rope was rated to 4800 pounds, but it just stretched after which it became brittle and crinkled between my fingers. The upshot is that we learned how to use the winch, but were unprepared to use it to haul this particular log.

Digression: I complained to the Amazon vendor. They required some documentation. But, in the end, they refunded the purchase price. I since bought a new polyester rope from the Portable Winch Co., the same company that provided my winch. I hope to try the winch again the next time I’m up on the mountain.

When it was clear that the winch setup was going to fail, we set up another system. This time we set up a direct haul using a hand come-along to winch the log in place. This had two disadvantages compared with the (theoretically) superior log winch: (1) The come-along only had about three feet of play, so we had to reposition the rig every few minutes, and (2) every inch of movement was manually cranked by Reese or me. Nonetheless, in about thirty minutes we succeeded in moving the first section adjacent to the mill.

The inexpensive swivel tongs ($35) that I bought from Amazon were just barely large enough to grab this log, but they worked perfectly.

To move the log onto the mill track we first set up two short 2×12 ramps and then rolled it using the woodchuck and peavey hook. Manipulating the log was not exactly straightforward, but we were successful using roughly the same technique that I had developed with David and Knox: rolling the log/cant with the woodchuck as needed, chocking with cutoffs to prevent rolling, and sliding along the track using the six-foot digging bar.

We had some trouble with the mill in the afternoon, including an alignment issue. As before, we had the experience of the saw blade wandering off of the wheels and cutting the aluminum cover. I am sure this is not good for the blade! We figured out how to adjust the angle of the band saw wheel and stop the wandering, although I think we may have over-corrected. The water bladder that is intended to provide lubrication leaks through a hole in the corner that looks as if it has been gnawed by a mouse. We filled and refilled (and refilled) the bladder, but every time we were ready to cut the water had invariably all run out onto the ground. It occurs to me that this lack of lubrication may be part of what is impeding our cutting.

Nonetheless, by the end of the afternoon, we had cut six boards (as well as the four cuts to transform from log to cant), all while waiting out at least two showers in the lean-to. The first board was 4/4, which I imagine might be a roofing board. But, after that, I decided to mill at 5/4, which I think will be better for floorboards.

When we finished sawing, Reese made a platform to dry the lumber. Reese and I moved the boards to the drying stack and I returned to piddling with the mill while Reese and Kit started a fire for dinner (not a trivial task, since we’d already had two downpours during the afternoon) — mountain style bangers and mash.