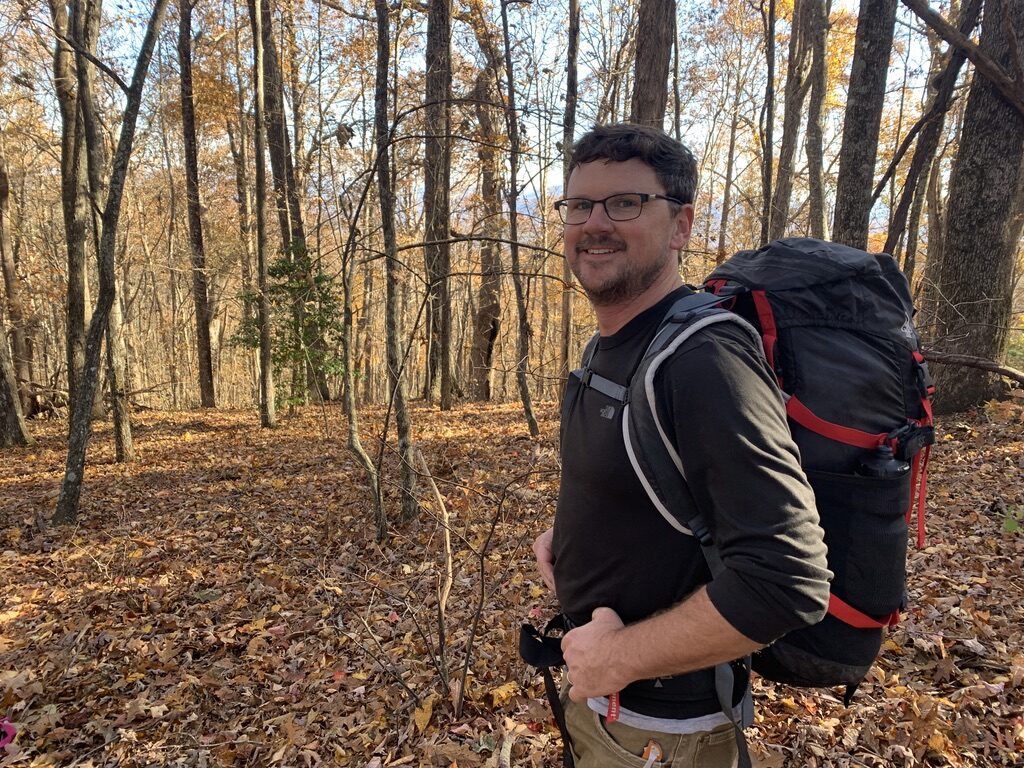 My partner last weekend was BJ Hudson. This time we only had two days (Saturday and Sunday), including travel. We got a slightly slow start, but nonetheless arrived in Hiawassee shortly before 8:30 and left for the campsite at 8:35.

Despite stopping to pick up the three short pieces of angle iron I had stashed at the base of the mountain, we made a great time, arriving in under 90 minutes. The campsite itself was a bit of a mess. Something (i.e. bear) had slashed through the cover for the ATV and one of the chainsaws was out on the ground. An insulated coffee cup (which had been thoroughly cleaned) was out on the ground about fifty feet away. Perhaps some residual smell is what had attracted him or maybe just curiosity. The canvas that Sean and I used to cover the gear cache was thoroughly torn up, but neither of the bins was opened or turned over. One of the toolboxes had been moved about ten feet, but it was still closed. Fortunately, there was no serious damage or loss of tools or gear.

After a pit stop, a tour of the cabin site for BJ, and an assessment of damages, we returned to the woodlot to skid logs.

We started in the area where Sean and I had most recently worked, near the upper staging area, dragging a large log up to the skidding track (#1). After this, we moved down below and pulled two very large logs up to a lower staging area (#2 and #3). The two large logs were one trunk that had to be cut. However, this trunk was high in the air such that when we divided the log both sections would shift. Given the double shifting, it wasn’t clear which way the logs would pinch. We also worried that the larger butt log (perhaps 2000 lbs wet weight) might move a considerable distance (its base was five feet in the air). The cut went fine, but we misjudged the pinch and the chainsaw got stuck just before dividing the two logs. We retrieved the second chainsaw from the campsite and gingerly touched the accessible sections of the pinched logs. It was delicate work and we were exceedingly careful, but ultimately nothing dramatic happened. The logs separated and we used the power winch to skid them to the staging area. While set up, we also skidded two smaller logs that were in the same area (#5 and #6).

When that work was done we moved toward the upper end of the back of the woodlot. (I sense that I need to draw a map, but that will have to wait for a later post.) For the time being, we left one large log parallel to the contour to act as a guardrail should other logs begin rolling while being skidded. Our first log from this section (#7) was a very large log perpendicular to the contour. Although it was intimidating, we had no difficulty skidding it to the upper staging area using a combination of the power winch and the ATV. Behind this were two smaller logs (#8 and #9), which we skidded along the same path. Finally, we pulled the “guardrail” (#10).

Uphill from the skidding road was a smaller tree that had been felled. This tree had an odd S-shape in the trunk, rendering much of it useless for lumber. After moving a bit of brush and other debris, we pulled the straight section down to the skidding track and then across to the upper staging area (#11). All of the preceding was accomplished with the gas winch and two double snatch blocks.

With only an hour or so before sunset, we turned our attention to an area where there are three large trees in a lower section. These trees are at the back end of the woodlot. It was clear which one of these trees would need to be skidded first. We cut this into three sections. The first section we skidded straight up to the skidding track (#12). The second and third sections were not entirely separated and when we attached the winch rig to the second section it dragged the third with it (#13 and #14). Finally, we turned to a tree parallel to these. Ultimately, this tree will also have multiple logs (probably two) After clearing some saplings that were in the way, we pulled just one of these logs up to the skidding track (#15). The other log will have to wait until we move a tree that fell parallel to the contour and will require a different skidding path.

We learned a great deal along the way. One of the most useful is that the ATV is quite effective for moving the small to mid-sized logs. As long as we hitched the ATV on a level contour or slight downhill it was able to pull these logs reasonably well. Even more exciting, we didn’t have difficulty on the last downhill to the campsite (i.e. no logs got “out of control”) and the logs naturally followed the ATV as it navigated a rather serpentine path around various trees throughout that section.

With the last minutes of daylight, we gathered tools from around the woodlot and BJ dabbed Anchor Seal on each new cut to slow the drying. Darkness was closing in as we returned to camp. I gathered kindling and set the fire. BJ collected water from the stream. For supper, we had bangers (actually andouille sausage) and mash (Idahoan instant potatoes) with gravy and wine (Trader Joe’s Chateau Hau-Brion, carried up in an unbreakable Accmore wine flask). BJ also brought a few ounces of Makers Mark, which we sipped well into the evening as we let the fire burn low.

It was a productive day. Considering that we took an hour for lunch and other chores, I figure we worked six and a half hours at skidding. With fifteen logs, that means we averaged 26 minutes per log. Not bad.