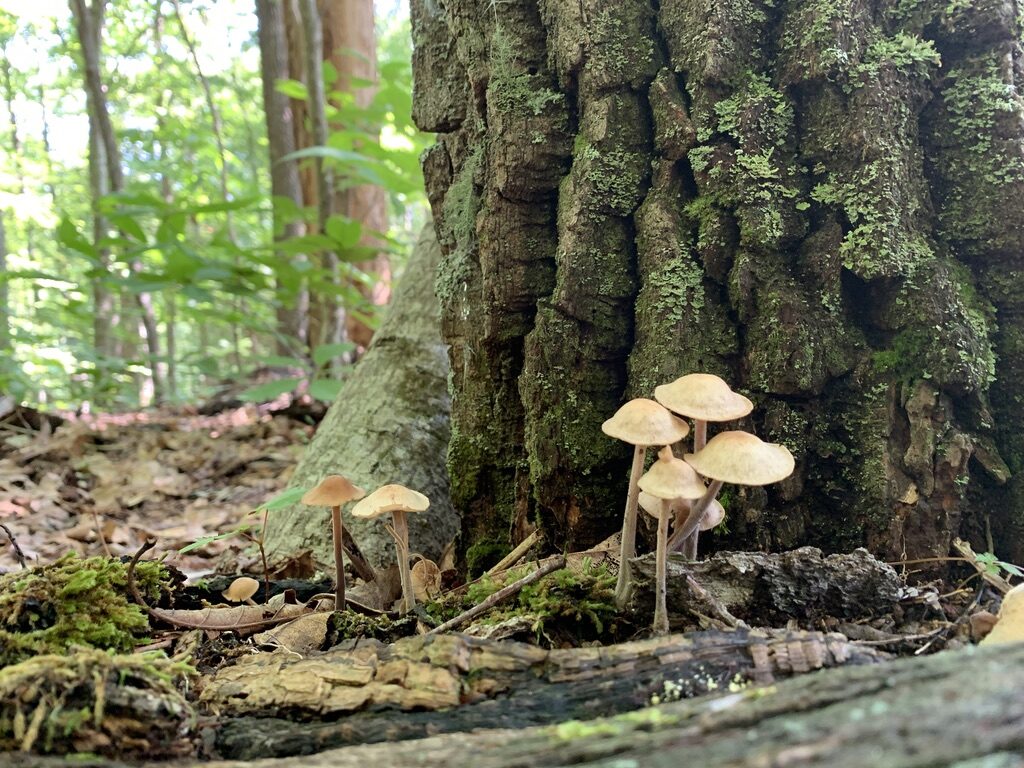 Friends David and Knox joined me in Hiawassee last weekend. Since we didn’t have a lot of time I decided my goal would just be to get the mill operational and begin working out the kinks.

The sky looked increasingly threatening as we approached camp, so we first set up some tents and a rain fly to duck under when the rain started. I’ve been visiting the site now for over a year. It had not rained a single time until two months ago, but my last four trips have been a hot streak.

Among other supplies, we brought up five new sawblades procured through Jim Lugo. On the last trip, Brian and I had set the saw in place but had not fully set it up. So, David and Knox began by spacing the cross ties, leveling them with scrap bits of wood, and drilling holes to screw the rails to the base. I made each rail from two ten-foot sticks of 3/16″ angle iron two inches wide and spray-painted to discourage rust. While David and Knox were setting up the track, I replaced the old rusty saw blade with one of the new ones, adjusted the tension, and filled the water bladder that drips on the saw while it’s running to keep it lubed. Unfortunately, I discovered that the bladder no longer holds water and it ran out all over the ground, which is something I’ll have to remedy on a future trip. I also lubed everything inside the case that looked like it could take it. Inside the cover of the Lumbersmith there is a small sponge that touches the blade to keep it clean, which I moistened with about a tablespoon of motor oil.

Here’s a photo of the mill set up with our first log. This is the log from which Brian and I had already removed about ten feet from the butt end. Even at what not long ago was ten feet above the ground, it was still probably greater than twenty inches in diameter, which I think is a bit large for this mill.

We had one small mishap with the first cut. After about five feet (of a fourteen-foot log), small slivers of aluminum started appearing in the sawdust. Obviously, this is not supposed to happen! So we cut the saw off, backed it up, and took the case cover off. Evidently, the blade was slipping forward on the idle wheel. Why was this happening? At first, I thought it was that the wheels weren’t aligned, but it appears actually to have been a greenhorn mistake. Everything with the Lumbersmith is manual. To tension the blade, the four bolts that hold the motor bracket to the case have to be loosened. I failed to tighten these bolts before we started cutting. Once these were tightened we didn’t have any trouble for the rest of the day.

Our experience with the Lumbersmith was that it was pretty tough to push through this log, tougher than it looks on Youtube. David and I found that if we worked together with one on each side we could keep the saw straight, which helped prevent the wheels from binding with the edge of the rails. We also found that the mill had a tendency to pitch forward, so whoever was standing on the engine side had the extra job of keeping the rear guide wheel from riding up. Sawdust accumulated on the engine-side rail pretty quickly. We adopted the habit of wiping it off each time, but it’s not really clear whether or not that helped. I think most of the friction comes from the contact between the blade and the log. One exception to this is that we routinely had difficulty navigating the joints in the middle of each rail, where the screw head sticks up above the rail about 1/16″ or so. On a future trip, I will try to countersink these screws, which should help.

Another concern I had was how we would manipulate the log on the track. When we first rolled the log onto the track it didn’t much matter which side was down. But after making the first cut, we would want to roll the log exactly ninety degrees and then re-center for the mill to make a second pass. From this chart, I estimated that our log weighed about 1,900 pounds. Just for kicks, the three of us tried to roll it by hand, just to see what would happen. The log didn’t budge.

We found it wasn’t too much trouble, however, to roll the log with the Woodchuck. Of course, the log would then be far from center. But, by prying with a digging bar placed under the middle of the log we could move the log laterally between the two rails. Then, when it was close to the position we needed, we would pry with the digging bar under an end of the log causing it to pivot around the midpoint, which was our way of fine-tuning the position on the track. We then chocked the log in place with offcuts that are by now starting to pile up. (I have a couple of old log dogs, but they need some rehab before they’ll be ready for use and they’re far too small for a log this size, anyway.) I’d been considering whether I will need some kind of log turner, perhaps an A-frame with a chain hoist. But the digging bar method worked pretty well for us this weekend and I don’t expect generally to be milling logs this large, so I might try sticking with it for the time being.

Altogether, it didn’t take more than an afternoon for us to get the hang of it. Eight cuts later, we had a small pile of 14-foot 2x12s that I hope will eventually appear as floor joists. We finished just in time, too, as we had just gotten everything stacked when the sky turned dark.