Learning to use the Alaskan mill and setting up the Lumbersmith 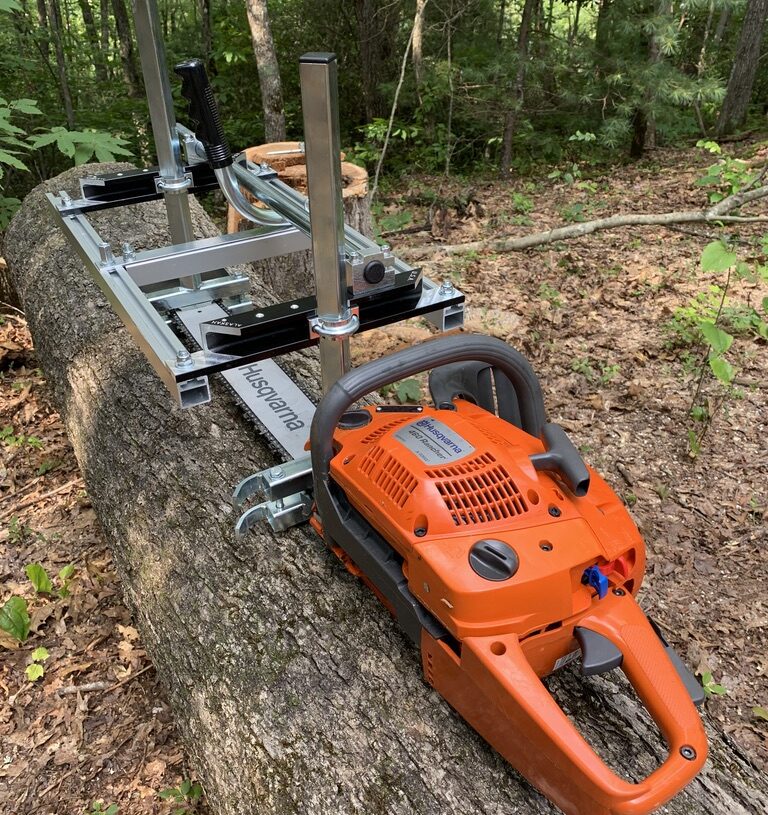 Learning to use the Alaskan mill and setting up the Lumbersmith

I made some more progress last weekend with the help of my friend, Brian. We accomplished a number of tasks. This post is about learning to use a Granberg Alaskan Mill and our plan for setting up the Lumbersmith.

Among other things, we managed to get the Lumbersmith to the cabin site. However, before I can begin milling lumber I will need to set up the mill. The biggest challenge was how to construct a track. For this, I decided to use a Granberg Alaskan Mill to make some heavy-duty cross ties. There’s a chicken and egg problem here: how do you mill cross ties when you don’t yet have a mill? For rails, I have forty feet of 2″ angle iron 3/16″ thick that I brought up last weekend with my teenage son and his friend in ten-foot sticks. I had the Granberg cached along with other tools, but I hadn’t assembled it or used it before. Brian and I spent the better part of an afternoon assembling the mill and an EZ rail system and working out the kinks.

One lesson learned is that a mill set up for a 24″ blade does not mill a log anywhere close to that size. The mill is advertized to make beams up to twenty inches wide. I found that with my configuration (Granberg 24″ Alaskan Mill paired with a Husqvarna 460R with a 24″ bar), set up pretty much exactly according to the instructions, I couldn’t mill anything larger than about 14″. The first issue was that to avoid pinching the nose sprocket on the Husqvarna, the leading edge of the mill had to be set back from the nose by several inches. At first, we had it too far forward and the chain wouldn’t turn. The second issue was that we found to make steady progress it was more efficient to seesaw the rig back and forth across the cut, first leaning in against the top of the cut and then pulling back at the bottom. Perhaps a more powerful saw would not require this. But, in our case, the seesaw required an additional few inches of play to work nicely.

A couple of comments on the Granberg mill. First, I’ve watched YouTube videos of fellows managing such a mill single-handedly. But, Brian and I found that it really required two people to effectively use the mill. We stood one on each side of the log and worked together alternating pushing “our end” through the piece. Second, we were frequently adjusting the depth of the mill. As manufactured, this requires using a chainsaw tool to manually loosen and tighten four nuts each time an adjustment is made. A quick-release mechanism similar to the type found on bicycle wheels would make the adjustment process much simpler.

Naturally, we had been too ambitious and the log we had chosen for making the cross ties was far too large for this setup! Our solution was to square two sides of the log using the chainsaw freehand making cuts in a fashion similar to traditional hand hewing. The next few pictures show the chalked log, indicating how much material we had to remove, and our progress as we milled out a few four-and-a-half-inch thick cross ties.

Another thing we learned is that the Alaskan mill cannot move all the way to the end of the EZ rail or prior cut. This means that if you are not cutting all the way to the end of a log, each subsequent cut will be about 4″ shorter than the previous one. Of course, this is obvious once you have made just one cut using the Alaskan mill, but it did not occur to us beforehand and we had set up our entire process to cut boards exactly five feet long.

Initially, we had hoped to get two or three cross ties from the first six feet of the tree. However, the base of the tree was significantly compromised by an ant colony, so we ended up taking the second and third cross-ties from the next five feet.

Once we had obtained the cross ties we cut the log off square and moved the remaining fourteen-foot section onto the cross ties. We didn’t have time to complete setting up the Lumbersmith, but the last picture gives an idea of what I hope to accomplish next.