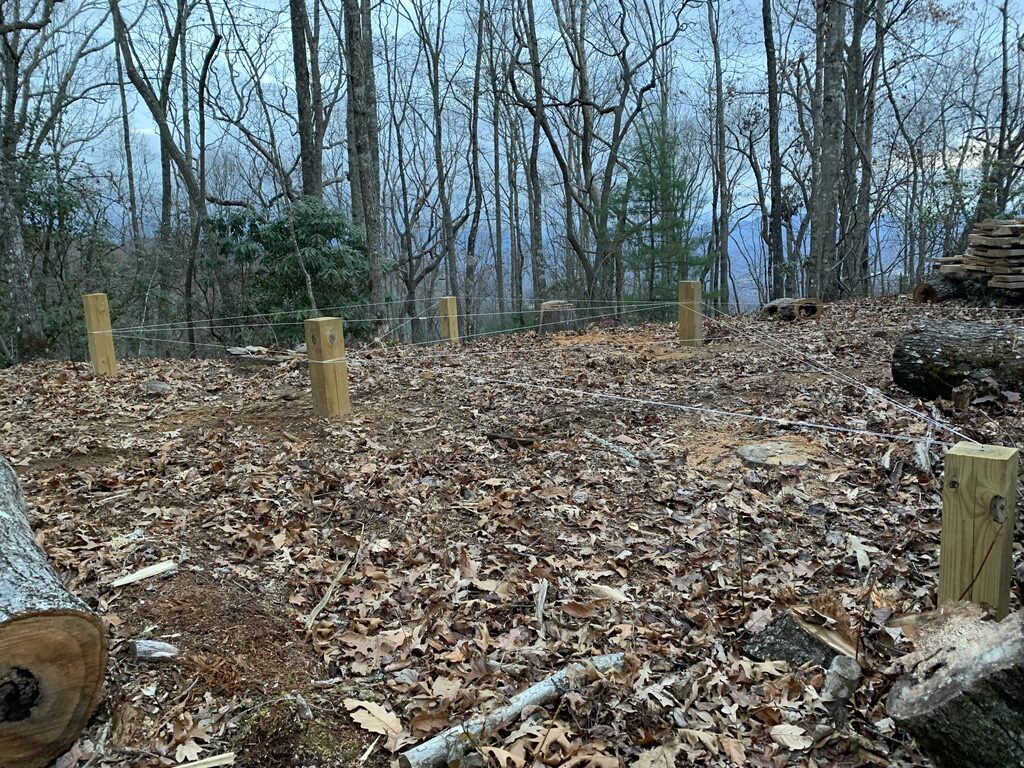 Originally, I was considering several foundation designs. But, in the end, a post-and-pier foundation proved to be the only feasible approach. For instance, I considered pouring a continuous concrete foundation, but without a way to haul much concrete to the site, this would not be possible. I also considered a slip-form stone foundation using local rock. But, even this would require more cement than I could imagine hauling up by hand and would also require moving several tons of rock from the closest stream, which is about 100 feet below the building site.

My plan, therefore, calls for a foundation of six posts, one each at the four corners and one in the center of each long wall. The cabin is planned to be twenty feet by twelve feet (interior dimensions). I made various calculations based on the intended height (ten feet), width (5 1/2 inches), and dry weight of the available timber. I’m not sure exactly how much the cabin will weigh, but six posts seems more than adequate.

The first question was what material to use for the posts. Given that the posts would inevitably be in contact with the ground, there were only a few options.

First, I could have just used oak or other hardwood timbers that I cut. But, these would not be expected to last very long — maybe ten or fifteen years.

Second, there is some black locust (Robinia pseudoacacia) on the property. Black locust is extremely rot resistant. For this reason, fence posts have historically been made from this wood. But, I was uncertain I would be able to find just the right pieces. When, eventually, I did have reason to cut a few black locust logs I was glad I didn’t choose to go this route. The stuff can be tough on a chainsaw.

In the end, I opted for six four-foot lengths of pressure-treated 6x6s. Like locust posts, the pressure-treated posts are expected to last around fifty years. Fifty years should outlast my use of a cabin. (I am 42.) These are the only pieces of dimensional lumber I plan to use in the project. I estimate that each piece weighed about forty pounds. There’s more about 6×6 hauling in the post Getting There.

There are different philosophies about how to fix a post-and-pier foundation system. Obviously, there is a need for the top of the posts to be a good deal above the ground to avoid splash and resultant rot. Twelve inches is typical. Also, one wants the posts to be deep enough to provide some resistance to lateral movement, especially during building. With four-foot posts, I was aiming for a depth of three feet with a gap of twelve inches to the bottom of the cabin.

Where the philosophies differ has to do with the kind of footer (no footer, gravel footer, concrete footer). A footer helps to spread the downward force due to the weight of the structure. I elected for a concrete footer. Then there is the question, if a concrete footer is used, of whether the post should be fixed in the concrete or not. Those who advocate for fixing the posts argue that the fixed post is more secure. Those who argue against say that if the post is well seated and deep enough there is no need for additional security and that inserting the post in concrete creates an opportunity for water to pool and encourages rot. I elected for a concrete footer of about 16″ in diameter with the post simply resting on the footer and held in place by the soil around it. In addition to the rot argument, it seems to me that if a post ever needs to be replaced, it will be much easier to remove if the butt end isn’t encased in concrete.

I hauled three fifty-pound bags of concrete up over multiple trips. Each trip took a couple of hours, so I wanted to use as little concrete as necessary. With the amount of concrete I had, the footers are about four inches thick.

Scott, Luke, and I began digging post holes in May. We used a combination of dead reckoning and elementary geometry to determine the positions of the posts. We started with a rough idea about the final orientation of the cabin, which we adjusted a few degrees this way and then that way to find the best compromise between a view of the lake, approachability on the ridge, and balance regarding the other trees and slopes. One point was then selected for a corner, and the other three corners were determined based on their relationship to this point. We used some small log sections as markers and mason twine to indicate the outline of the cabin. We figured the angles first by calculating the correct length of the hypotenuse (30′ 11 1/8″ from center to center) and then adjusting the position of the markers a half-inch at a time until the two hypotenuses were equal and matched the calculated length.

Expecting to be digging in rocky soil, I had brought up a heavy-duty round shovel, the kind with a welded plate across the back for strength and stiffness. I also brought a piece of hardware cloth that I planned to make into a sieve so that any rocks or gravel that came out of the post-holes could be reused. In the end, neither of these tools was particularly useful. We did most of our digging with a short-handled spade, a 72″ digging bar, and a plastic food container. The spade was useful at the beginning to shape each hole. (We tried to make the holes bell-shaped, with a narrow opening giving way to a large flat base of 16″ diameter for the concrete footers.) We then used the digging bar to excavate beneath our feet at the part where the bell-shaped opening would flare. Finally, we laid down on the ground and used the food container to remove the broken-up soil from the bottom of the hole. There were almost no rocks. We dug as deeply as we could reach with the food container, about thirty inches.

Even though we started working on the foundation in May, that work was mostly set aside during the summer and fall to focus on felling trees and preparing logs. Additionally, I decided to take out another large tree that would have threatened the cabin, so this was most of a weekend of work. In retrospect, this was certainly the right choice as the base of the tree was quite rotten. Thus, it wasn’t until November that I placed the last two posts.

My goal was to have the shortest post reach 12” above the soil. With the posts in place, they could now be cut level with one another. Of course, the final height of the posts was determined by the maximum height of the post with the lowest base. It turned out that the two posts at the northern and southern corners were the lowest and already at equal height (to within my ability to measure, anyhow).

To cut the other four posts to the height of these two, I unwound a large amount of mason twine and drew a tight line between each pair of posts. I used a line level to check the vertical angle of the line along each segment and then iteratively adjusted where the lines were attached to the posts until I could not improve the fit.  I then marked each of the four posts on all four sides and cut each side with the circular saw. I chose the circular saw because I thought it would make a cleaner and straighter cut than the chainsaw. The downside was that the maximum depth of the saw blade was about 3/16” less than half of the width of the posts. So, even after making four cuts, the block to be cut was still held on by a small section of about ⅜”, meaning that I had to knock off the cutoff end with a hammer and smooth out the broken section. With posts now in place, construction can commence as soon as timbers have been milled.