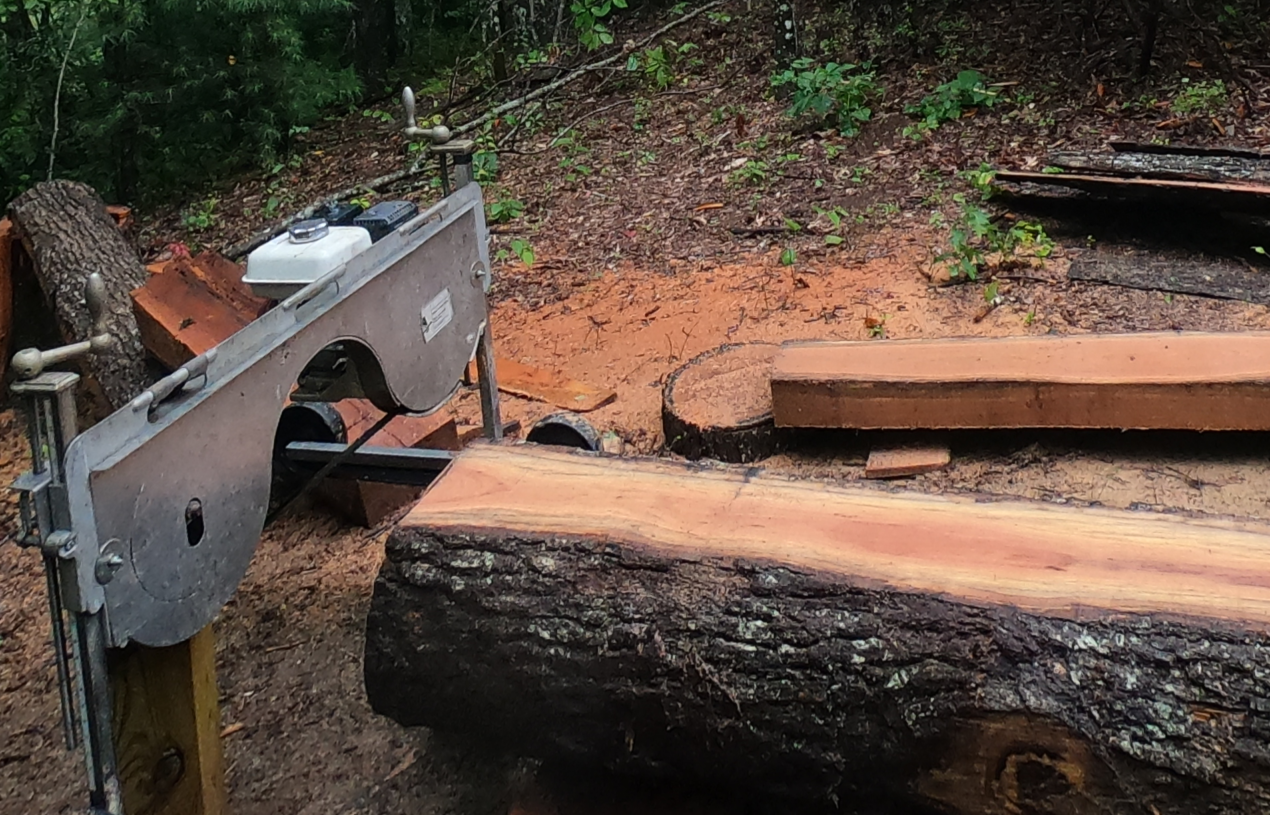 A few issues with the Lumbersmith sawmill cropped up during my last trip. This post is about how I’m currently dealing with them.

In my earlier post on the trip with Reese and Kit, I mentioned that the blade was cutting into the aluminum cover. Here’s a picture showing the damage.

This seems to happen either when the blade is wandering or if the blade becomes stuck and we have to turn off the saw and back it out. I think we fixed the alignment issue. In the future, I just need to remember after backing the blade up to make sure it’s fully seated on the wheels before starting the engine again. As long as the wheels are aligned, it seems this can be achieved by leaving the engine switch in the off position and pulling the pull cord five or six times to turn the blade on the wheels.

For now, it seems like the safety cover will continue to work. If it gets much more damaged I’ll have to make a new cover for it. It occurs to me that a plywood cover would be just as effective and not dull the blade.

Another issue that came up last time was that the pull cord broke, I guess due to its age. It was the usual thing where I was pulling really hard on the cord when it let go. I almost went flying and looked down to see that I was holding just the handle and about six inches of the original cord.

The recoil assembly is held on with three small bolts. Initially, I tried to use some of green 6mm rope that I had been using for my bear bag. Unfortunately, this rope was just a bit too thick to fully wind around the recoil spool and caused too much friction feeding through the housing. My second attempt was a piece of nylon paracord. I think the paracord is actually too thin and I expect it will wear out quickly. But I didn’t have any trouble starting the engine with it and proceeded this way for the rest of the afternoon.

The original lubrication system on the Lumbersmith is a water bladder, a lot like the old Camelbak hydration systems. A small tube with a plastic adjustable valve leads into the housing of the saw and drips water on the blade. Mine had a hole that we tried to repair with Gorilla tape, although that didn’t work. Unfortunately, I didn’t take a picture of it before tossing it in the trash. It’s interesting to me that when I looked at the handful of Lumbersmith photos online, only one of them actually had the system installed. I wonder how all the others are lubricating their cuts, or if they’re just ignoring lubrication. The next picture shows where the bladder is attached to the right side of the saw. Apologies for the grainy image.

I think a sturdier bladder might be beneficial. My solution is to use one of the collapsible water jugs I use for drinking water. Before throwing out the old water bladder I cut out the nozzle, which consists of two pieces. One piece is the spout, including the 90 degree angle seen in the photo below. The other is a plastic threaded nut. I drilled a hole in the cap of the jug, twisted the nozzle through the hole, liberally sealed with RTV silicone, and then threaded on the nut. The final product can be seen in the next photo.

The last of the latest fixes is probably also the least significant, but I wanted to include it to illustrate the variety of challenges faced in the off grid context. The Lumbersmith is raised and lowered manually. Every adjustment of the blade height requires loosening two bolts using two cast aluminum threaded handles. I noticed when I was cleaning the sawmill that the handle on the left saw riser was pretty sticky. The left side is also the side where the sawdust is expelled. I supposed that the stickiness was just sawdust jammed up in the threads and that if I took the handle all the way off I could clean it and restore it’s proper functioning. About halfway off it became apparent that the real cause of tightness is that the handle was cross-threaded. It required a significant amount of force, but I did manage to get the handle all the way off. I tossed the steel bolt and threaded handle into my bag.

Once home I used a tap and die kit to clean up the threads on both the bolt and the handle. It threads very smoothly now and it’s back in my bag ready for the next trip up the mountain.