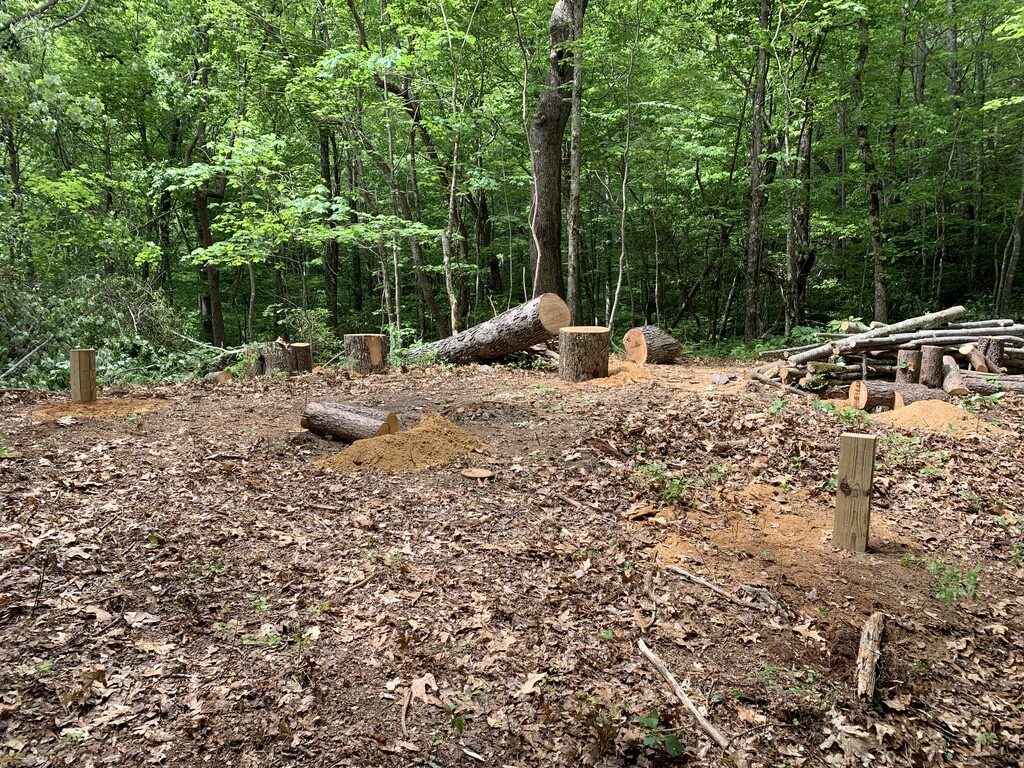 Clearing a space for the cabin has not been problematic at all. The footprint of the cabin falls squarely upon the main area that I had been using as my campsite, so some of the shrubs and greenbriar had already been trampled, pulled, or cleared for tents.

I began clearing during the recon trip with my dad and brother described here. In only a couple of hours, we cleared the necessary brush and cut down two trees, a small maple of perhaps four inches in diameters, and a pine that was 12″ or so. Possibly the most labor-intensive task was moving the firewood that had been stacked between these two trees to another location.

On a later visit with Luke and Scott we removed the one large tree that would be in the way of the cabin. A video of Luke felling the tree can be seen at the end of this post about my Stihl 362 chainsaw. Here’s a picture of Luke counting the rings.

In general, I’ve tried to disturb the site as little as possible, partly because my philosophy is to have as little impact on the forest as possible (while still being able to enjoy it) and partly because I’m not yet entirely sure what I want to keep and what I want to remove. It will always be possible to remove more later, but there’s no possibility of putting something back once it’s been cut down.

Although the butt log of the white oak was in very good condition, the top of the tree above a very heavy horizontal branch was quite rotten and would have been a persistent hazard had we not removed the tree. Besides this, the horizontal branch made the tree highly imbalanced and liable to fall anyway.

Removing the oak opened the canopy considerably as shown in the next photo. From the orientation of the trees, you can see the way in which the ridge falls away in all directions. Behind the cabin site is a small grove of mountain laurel and rhododendron that Scott named “the copse”. On the left is a pile of poles I’ve saved from smaller trees and branches. I don’t have any immediate plan for these poles, but am sure they will be useful as the project develops.