One man's discourse with the universe 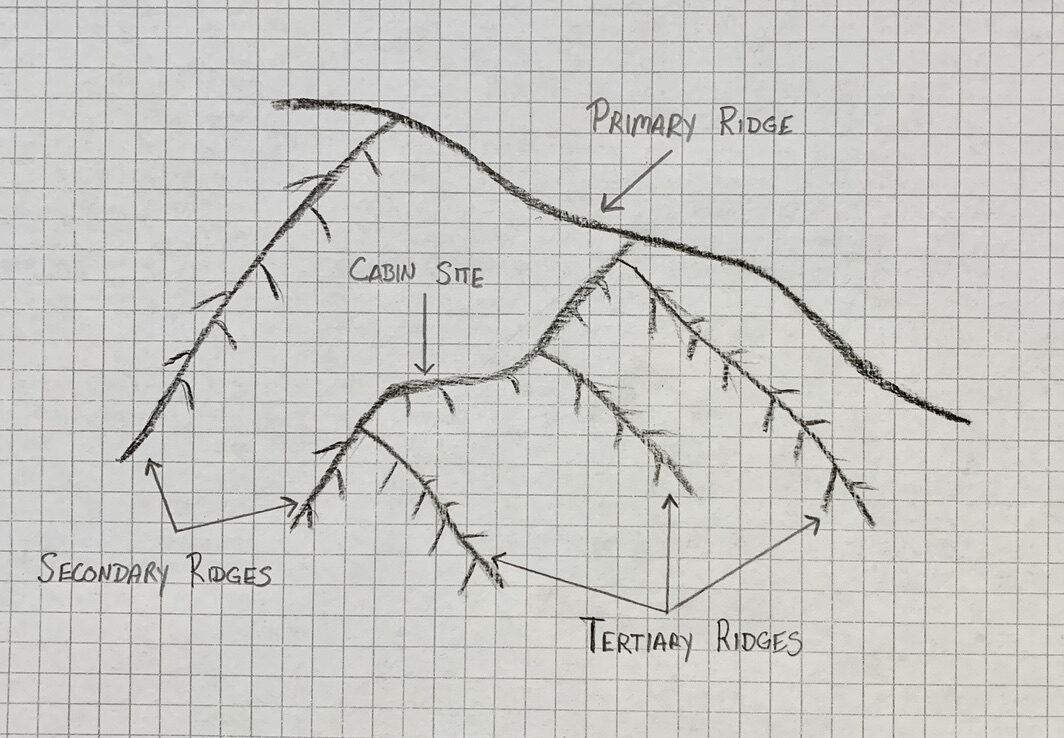 Choosing the general site for my cabin was straightforward. My property is relatively steep and the topography is somewhat complex. From the main ridge at the top of the property, there are two secondary, east-facing ridges. One of them is on the boundary and the other cuts straight through the middle. From this second secondary ridge, there are three or four tertiary ridges.

My site selection criteria included: (1) a level spot since I will be laying the foundation by hand, (2) a view, (3) some degree of privacy (I don’t want to build by camp/cabin where everyone can see it and to preserve the natural aesthetics of the area I didn’t want to place it right on top of the main ridge), and (4) sun exposure, mainly for light. The only level spots on the property are at the top on the main ridge, a location where the secondary ridge flattens out, and in some hollows formed by the tertiary ridges. The first option (the main ridge) was out because I wanted a less conspicuous location. The third option wouldn’t have had a view or sunlight. So I very quickly chose the secondary ridge as the location.

Choosing the specific spot on the secondary ridge was considerably more complicated. I looked for guidance online and in my pile of cabin books, but didn’t find much. I did keep in mind Christopher Alexander’s maxim to not build on the most beautiful site. Initially, I was concerned with preserving a location for a future house, but my dad and brother convinced me that if I ever get around to building a house then I will necessarily have equipment on the property. Moving such a cabin as I have in mind would be a relatively small task. This removed one design constraint. The others were more aesthetic and functional.

In the end, I eventually made several trips before deciding on the final site location. I went once in January, by myself, to walk the property looking at possible sites, even though I was 90% certain that I would choose to build on the secondary ridge. I also brought a ball of string and laid out a couple of different footprints to help me visualize. Even after I formulated my own opinions, I had some others up to the site for their thoughts. First up was my friend Scott, who teaches in the landscape architecture program at the University of Georgia. Rather than revealing my own ideas, I asked Scott to wander around thinking aloud. After an hour and a half or so of this, Scott landed in pretty the same location I had, which I took as a useful bit of confirmation! On another occasion, I had my dad and brother Peter up. Dad and Peter are engineers of different stripes and have previously built cabins of their own. My friend Ed, a civil engineer, also joined us. Again, I didn’t let on to my ideas until they had formed theirs. Peter’s preferred location was a little forward of mine, on a steeper section of the ridge. Dad’s was removed from my idea by only twenty feet or so. (Ed wasn’t there for this part of the trip, so he didn’t have the opportunity to register an independent opinion.) All agreed that the precise final spot came down to personal preference and in the end I selected exactly the same location that I had happened upon during my very first visit to the property a year ago.

Aesthetically, there was a choice between viewing the lake about three miles away at the outlet of the watershed or viewing the completely undeveloped and forested basin. Another aesthetic consideration was whether to build at the back of the flat area so that the flat part of the ridge would form a sort of front yard, centered on the flat spot, or in front of it so that the ground falls away. In the end, I chose to face the lake and the central location for its relative exposure in multiple directions.

Now that the cabin site was known to within 10 meters or so, I still had to determine the precise location and orientation. This was guided by a few considerations.

First, there are two large trees that I did not want to sacrifice. The final site of the cabin would need to be far enough from these that we didn’t threaten them and they wouldn’t threaten the cabin. Also, there is a small tangle of mountain laurel and rhododendron on the tip of the ridge before it falls away. Initially, I was going to clear this area to improve the view. We started by pulling out the dead branches and greenbriar. After clearing these, the tangle opened up into something like a little grove, with a canopy high enough to walk under. There’s also a spot large enough for a table and chairs under the canopy, so I began to imagine keeping the grove. This required setting the cabin back a few more feet from where I’d initially envisioned it. I suppose I may still clear or trim back some of the grove, but it will stay intact for the time being.

As an aside, here is a picture I took of an interesting weathered stump on the edge of the grove right when the mountain laurel in the foreground was in bloom.

Another siting consideration was how level the building spot was. I wanted to actual cabin site to be as level as possible. My foundation plan is six pressure-treated posts set on concrete footers. For lateral stability, I want the posts to be seated as deeply as possible. But, with the tools we have, we can’t remove soil from any deeper than we can reach — about 36″. (The most effective digging technique I’ve discovered so far is to shape the hole with a digging bar and then remove the loose soil with a plastic food container. I’ll try to discuss this more in another post.) The pressure-treated posts are 48″ long. Thus, to raise the cabin to the intended 12″ above the ground, I needed the highest and lowest foundation holes to differ by no more than the depth of the concrete footers, which is about 4″.

The final issue I considered was the approach. The secondary ridge narrows to about 15 feet wide on top prior to flattening out at the end where the cabin will go. Any approach, whether on foot or by vehicle, will naturally follow this ridge. I want the approach to the cabin to feel natural, not too far offset from this natural path. Of course, the path could lead directly to the front of the cabin, but I expect eventually to have an ATV on the property, which I plan to store in the cabin accessed through some double doors on one end. Thus, the slope of the ridge and the angle that one would approach also constrained the last final site location.

In the final stages of site selection I set up some logs to mark possible locations for the four corners. A strong connected the four corners to help visualize the footprint. Together with Scott and another friend, Luke, we adjusted the logs until the location felt right. We then double checked all the design criteria: distance from the trees, distance from the rhododendron grove, the angle of natural approach, the angle of approach with the ATV. We also checked that the open area on each long side was of a suitable size for yard, patio, or deck. Although none of those features in my current design, they are likely future additions.