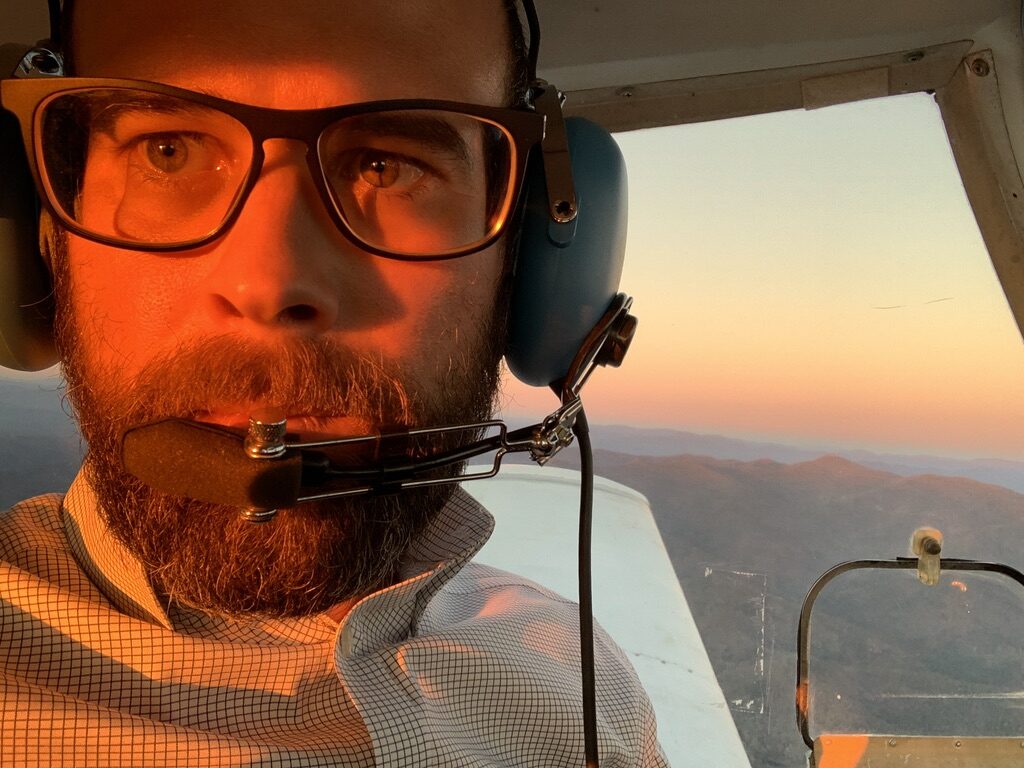 We have a word, in hiking and mountaineering, for that condition when the world is laid out before one, when what is most present is nothing, that is abyss. The condition is not easy to achieve. Usually, there is a cornice overhead or a dihedral behind. The experience is heightened by an arête or ridge. At its extreme, the world is laid out below one and all around, but this occurs only at a summit. The word is “exposure”.

I have always loved the exposed parts of a hike or climb. I wonder if that is what caused me, some years ago, to become enamored with the idea of flying. I emphasize that, at the time, it was an idea. Although it was not a practical pursuit, I did spend many hours with the Student Pilot’s Flight Manual, though it was purely philosophical.

Fast forward a few years to Summer 2021. Between the conceptual phase and the present time I made a new friend, Nick, who has a plane; specifically, it is a 1964 Piper Cherokee 140. Now, Nick has introduced me to Phillip. Phillip has just obtained his CFI (Certified Flight Instructor) rating and is eager to take his first student. It took a few months, but Phillip and Nick (and relevant business partners) worked out an arrangement for Phillip to use the Cherokee for flight instruction.

Pragmatically, 2021 was not the year for me to take up flying. This was, after all, the year that I embarked on the indeterminate Hiawassee Project. Sense says it would have been better to wait. But, as Emily Dickson said (and Selena Gomez recapitulated): the heart wants what it wants. Truthfully, I didn’t give it a second thought.

My first flight was on October 15, 2021. In my diary, I wrote, factually if not effusively:

For the better part of an hour, we flew around the Elberton area, exchanging the controls as Phillip taught me to turn, maintain level flight, ascend and descend, etc. After about an hour we headed back to Athens, landing just around sunset. We celebrated with pizza and beer at Johnny’s.

According to my logbook, thirteen hours flown have passed since then. I have learned takeoffs and landings, steep turns, emergency procedures, and stall recovery. I’ve learned to use the radio (I’m not very good at it) and instruments, and a hundred other things. And, I love it.

Flying brings man and machine together in a way similar to that of riding a motorcycle or driving a car, yet also different. It is a vehicle, like an automobile, but one that travels in three dimensions. Moreover, in contrast to modern cars, where the connection between operator and engine is mediated by a thousand mechanisms, even a digital computer, the connection between pilot and aircraft is quite immediate. Phillip says you fly with your butt. I think I know what he means. When Brian and I rode US 129 (aka the tail of the dragon) on motorcycles, it was definitely a seat-of-the-pants operation. You feel the capabilities of the machine without understanding the physics. You simply experience the bank and the roll and maneuver accordingly. In the plane, you also feel the yaw and pitch, increasing the vestibular dimensionality threefold.

In some ways, piloting an aircraft is like sailing. One is attuned to wind and lift. The direction of travel is not necessarily the same as the direction of orientation. Still, the transmutation of the frame of reference from two dimensions to three adds significant complexity. Moreover, the speed of travel is increased by an order of magnitude.

“Exposure” is an interesting word. It signifies disparate things. A commonality among signifieds is a vulnerability that seemingly leads either to death (e.g., hypothermia) or to the exhilarated life that emerges from familiarity with the possibility of death. Recognizing the double sense of “exposure” (i.e., that of the heart, which threatens the ego, and that of the three-dimensional position in the atmosphere, which threatens the body of the climber, hiker, or pilot), it seems to me that flying is truly, for me, a new kind of exposure in which I find myself newly positioned, both mentally and physically, for exploration.